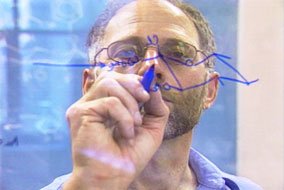 My research interests have always focused around the fascinating question of how enzymes function as such formidable catalysts. Enzymes involved in glycosyl transfer have served as useful model systems for developing this understanding, especially since they are amongst nature’s most proficient catalysts, accelerating reactions by some 1017 fold.

To address these questions we have combined our ability to synthesise substrates and inhibitors with classical enzymology and molecular biology such that we can alter the structures of both the substrate and the catalyst and then measure the consequence of the modifications on reaction rates. Collaborations with structural biologists have allowed us to then visualise the enzyme in action. The role of non-covalent interactions between the enzyme and substrate in stabilisation of ground and transition states has held a particular fascination for me, as well as the development of methodologies to stabilise or trap intermediates in catalysis. Increasingly I am becoming interested in applying our understanding to the development of new tools and hopefully therapeutics. These thoughts are laid out in the Research Program section.

In my non-work hours, I like to kayak on the ocean and local rivers. Particularly close to my heart is to paddle around the Gulf Islands just west of Vancouver, starting from my cabin on Mayne Island. When my knees permit I still enjoy running through the UBC woods, though days of competing are long past!